With the possible exception of the Pew Research Center, I would opine that any think-tank has its Weltanschauung, even my most favorite think-tank, the Cato Institute. Worldviews notwithstanding, I still expect a think-tank to maintain as much objectivity as possible, regardless of its leanings. I was under the impression that the Center of American Progress (CAP) was the Left's equivalent of the Heritage Foundation, and that CAP would be the only think-tank to lean that far to the Left. In spite of leaning to the Left, I thought that a think-tank such as the Center on Budget and Policy Priorities (CBPP) was still respectable as think-tank. But then I read an article of theirs postulating that a key reason why poverty has not declined is because the government has not pumped enough money into unemployment insurance (UI), and I had to reconsider.

If CBPP is correct in its assertion, at the very least, there should be a high correlation between poverty rates and money spent on unemployment benefits [per recipient]. This means that X leads to Y, i.e., increasing spending on UI leads to lower poverty rates. Whether it is with something like crime or poverty, I have a problem when people say that X is [one of] the [primary] causes of Y because the world is usually much more complex than that. Their assertion should be easy to [dis]prove. First, aggregate the data on money spent on unemployment insurance, which is courtesy of the Department of Labor. Then, aggregate the data on poverty rates (Census) and synthesize the data to run a regression analysis. Unfortunately, due to the government shutdown, I was unable to retrieve the poverty rate data. The link should work when the tomfoolery in DC is over, but in the interim, I have to show graphs illustrating the trends of both spending on unemployment benefits and poverty rates. (I may or may not run the bivariate regression once the shutdown is over). I created the first graph since the Department of Labor's graph was not as illustrative (FYI: The first graph is in real 2013 dollars). The second graph comes from the UC-Davis Center of Poverty Research, whose graph is based on data from the US Census. 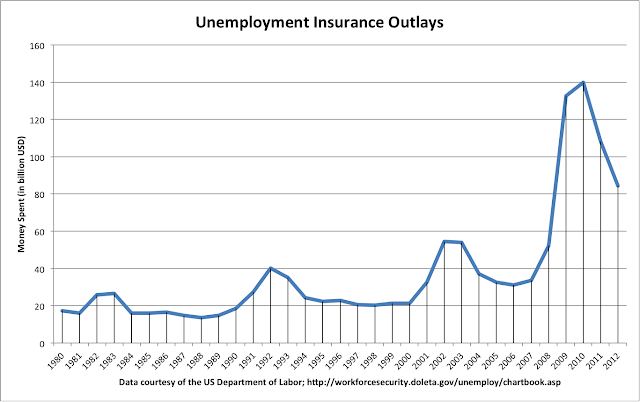 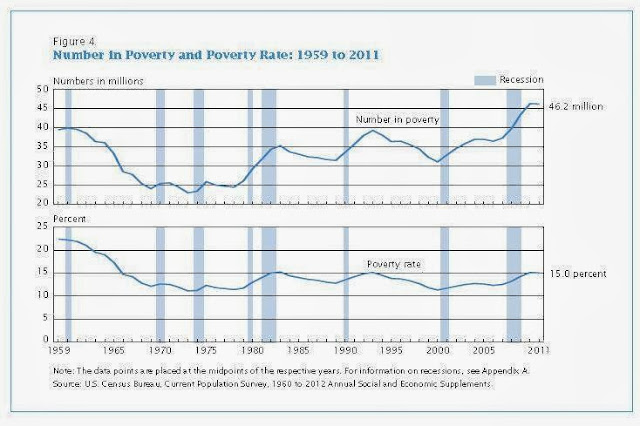 When comparing the poverty rate trend with the outlays in unemployment benefits, I am looking at these trends and I am not seeing anything remotely resembling causation. Now why would that be? Given the interconnectedness of economic activity, you would think that factors such as supply and demand, technology and innovation that typically lower prices, rates of taxation, the number of burdensome regulations, monetary policy, or larger forms of fiscal policy would be better explanations for the poverty rate. But no, the CBPP wants to cling on to the notion that unemployment benefits are so pivotal that if we eliminated unemployment insurance right this second, we would most likely have a double-dip recession.

Much like with food stamps, one would have a much stronger argument if unemployment insurance were used for temporary financial relief, as opposed to long-term poverty relief. For one, if the job market truly worked where the government could just print money and send people a paycheck, why not do so as a long-term stimulus? That way, no one would have to work ever again. The downside to that is that is not how the world of economics works.

11-16-2014 Addendum: Add the Federal Reserve Bank of St. Louis to the list of those who found that unemployment benefits create substantial issues (in this case, moral hazard and monitoring costs). Apparently, the basic universal income would be a better policy alternative in comparison.

Think Tanks From All Sides of the Political Spectrum

Effective June 18, 2011, all comments will be subject to review prior to being approved. I have two simple rules:

1) Do not use profanity. Profane comments will not be posted.

2) We are here to discuss the issues at hand. Personal attacks are uncouth, divert us from intellectual discussion, and are used as a last resort for people who don't have an actual argument. Any comments containing personal attacks will automatically be deleted.