The Federal Government Has No Business Bailing Out State Governments, Especially With Coronavirus as a Pretext

As if it were not enough that Congress passed a stimulus bill (the CARES Act) that exceeded $2.1 trillion, the House now wants to pass another $3 trillion bill: Health and Economic Recovery Emergency Solutions (HEROES) Act. If the HEROES Act passes, it would nearly double the $3.6 trillion Congress has spent since mid-March. Part of the HEROES Act is the Coronavirus State Fiscal Relief Fund, which would be to the tune of $540 billion. The purpose of this Fund is to provide aid to states that are financially struggling due to the unanticipated costs of coronavirus. As nice as it might sound to help states in need during this pandemic, this is a deficient policy response for a few reasons.

1. The aid does not address coronavirus-related costs. If you look at the language of the HEROES Act, it states that the funds are available "for making payments to States, territories, and tribal governments for any purpose (own emphasis added)." This is essentially unrestricted aid that does not directly respond to costs incurred because of the pandemic. This is not coronavirus aid or relief; it is a bailout to state governments.

2. States already have rainy-day funds. As the Tax Foundation illustrates (see below), states have rainy day funds. Rainy day funds exist precisely for when such unforeseen circumstances as this pandemic happen. It is reassuring that rainy day funds fared better now than they did before the Great Recession (Pew Charitable Trusts). Plus, Congress already provided $150 billion to states in coronavirus-related aid in the CARES Act to supplement its rainy day funds.

If you are a government official that is worried about your coffers, perhaps it is time to reconsider the lockdowns. Since the current economic downturn is caused by suspending various forms of economic activity, it is possible that such funding could shield states from the costs of implementing lockdowns, thereby delaying economic recovery. 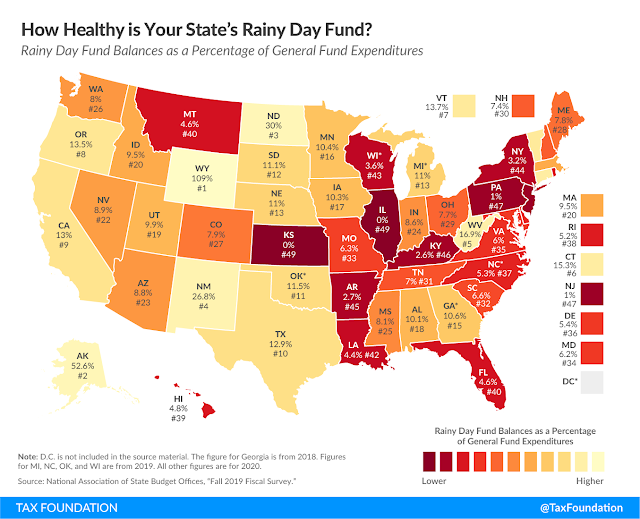 3. The HEROES Act would continue to reward fiscal mismanagement. The unrestricted nature of the aid combined with the fungible nature of money would make the Fund a de facto bailout of debt primarily created by burgeoning pension costs and retiree health costs (Pew Charitable Trusts). As the Wharton School of Business at Penn State mentions, the pension issue has been around for decades. Much like I brought up with the U.S. Postal Service earlier this week, the problems of state governments predate the COVID-19 pandemic.

According to another report from Pew Charitable Trusts, the states that managed their funds best are the ones who took their actuaries' advice, as well as cutting benefits and increasing contributions when needed. How fair is it for states who exercise fiscal discipline to pay for those who do not? My home state of Illinois is a good example. Out of the $33.6 billion it requested for its state budget (the remaining $6.4 for UI benefits), only $2 billion [for Medicaid benefits] would have been for pandemic-related expenditures.

To reiterate, funding has been provided to address the immediate concerns brought on by the pandemic. Anything beyond that would be imprudent.

4. Past bailouts of state government created greater and more inefficient government spending. In response to the market turndown of 2002-2003, the Bush Administration approved $20 billion in state government bailouts through the Jobs and Growth Tax Relief Reconciliation Act of 2003. Instead of getting finances under order, state spending increased by 33 percent from 2003 to 2008 (Norcross, 2010).

State budgeting did not fare better under the Great Recession. The American Recovery and Reinvestment Act (ARRA) allocated $300 billion to state governments as a bailout. About $50 billion was meant for education systems stabilization. But as the Right-leaning Heritage Foundation points out, most of that education funding was not for stabilizing, but for expanding staff, especially non-teaching staff. In spite of the $90 billion in ARRA Medicaid funds meant to be a one-time provision, 28 states built in their 2011 budget the expectation of higher Medicaid funding (Norcross, 2010). According to the Federal Reserve Bank of San Francisco, the $70 billion allocated towards transportation projects were skewed towards state with lower unemployment, i.e., states who needed the funding less (Wilson, 2009).

Through these bailouts, we see the federal government becoming more responsible for state budgets. The percent of state funds from federal revenue grew from 26.3 percent in 2001 to 32.4 percent in 2017 (Pew Charitable Trusts). All this moral hazard done is created greater incentive for states to rack up unfunded liabilities while depending on the federal government to solve their problems.

5. This would create fiscal pain and a disturbing precedent for the future. If we throw billions of unrestricted dollars to state governments now, it would create moral hazard of a high magnitude because it would create poor incentives while doing nothing to solve state budgetary issues. It would allow for the federal government's increasing role in future state-level government affairs, which would further erode state sovereignty. More to the point, past bailouts have already eroded fiscal discipline for many states and have made state budgets less resilient in future crises. Plus, it would push the U.S. federal debt closer to a level of disaster because it would mean we would pay interest in the long-term.

Ultimately, Congress' response should be towards the temporary and targeted approach to the pandemic, not by creating perverse incentives that will affect budgeting processes for years to come.

Posted by Libertarian Jew at 9:50 AM

Think Tanks From All Sides of the Political Spectrum

Effective June 18, 2011, all comments will be subject to review prior to being approved. I have two simple rules:

1) Do not use profanity. Profane comments will not be posted.

2) We are here to discuss the issues at hand. Personal attacks are uncouth, divert us from intellectual discussion, and are used as a last resort for people who don't have an actual argument. Any comments containing personal attacks will automatically be deleted.